In order to restore Unity, Discipline and Faith, we believe in FULL MILITARIZATION of PAKISTAN. This policy shall provide jobs for everybody. Every citizen of Pakistan, every man and woman shall now have full opportunity to serve as a SOLDIER OF PAKISTAN.

grants you life and all human beings shall work without any coercion.‘—JPP Manifesto 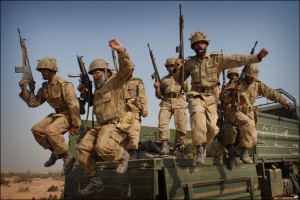 We promise to transform the People of Pakistan into (Al-Hadeed), a nation of steel, through organization, devotion and an unyielding commitment to a Rule of Law. This can only be achieved by dissolving the present ‘Free Standing Army’ of The British Raj. We need to create a new Army for Pakistan, an Army that shall not rule over its own people but where the people of Pakistan shall rule over their Army. It shall be an Army where every soldier shall be called an OFFICER OF PEACE. (MOMIN). There shall be no segregation and class discrimination in the ranks of the Army. Every soldier shall be a Commissioned Officer and treated with the same dignity and respect with which the Commander in Chief is treated. All soldiers and their families shall have free access to in-patient and out patient health care. There shall be absolutely no discrimination. There shall be no Officers Class and Sepoy Class. We shall abolish every kind of discrimination. We shall enact Laws to eradicate discrimination. Everybody shall get the same treatment in hospitals. And of course, we promise the highest standards of Healthcare.
Let me assure the critics of Militarization. Israel, China, Spain, USA and even India have set their goals to turn every citizen into a soldier. The right to bear Arms is granted to every American. Militarization is the life and blood of Islam. For 14 centuries we have been a Nation that stands in a Military Formation, five times a day. We want to activate this Militarization. It is our core belief that every man and every woman must rise to defend the cause of Allah

. To us it means Equality, Equal opportunity and Justice. There shall be no coercion. We promise to establish this system. 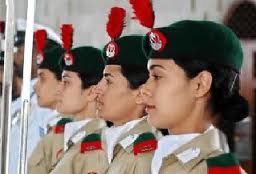 MOMINAAT: The Pride of Islam

We believe that defending the country against all kinds of internal and external threats is the responsibility of every citizen. We all shall be The Armed Forces of Pakistan, actually participating in all field operations. Our present Armed forces, under directives of the Commander in Chief, shall establish multiple Training Academies like the Pakistan Military, Naval & Air Force Academies on District Corps Headquarter level.

Mominaat: The Pride of Islam

We shall ensure advanced Military training facilities at District Corps Headquarter level. Training academies shall offer Long courses and Short refresher courses based on hi-tech warfare training. Every citizen shall be encouraged to participate in these training courses and awarded degrees and certificates accordingly. All citizens shall work under their District Corps Headquarters. With such a trained force, we shall destroy the Blackmailer Terrorists. These trained citizens shall take orders from The Commander in Chief and peace shall prevail in Pakistan and in the world.

One thought on “Nizam e Askari”